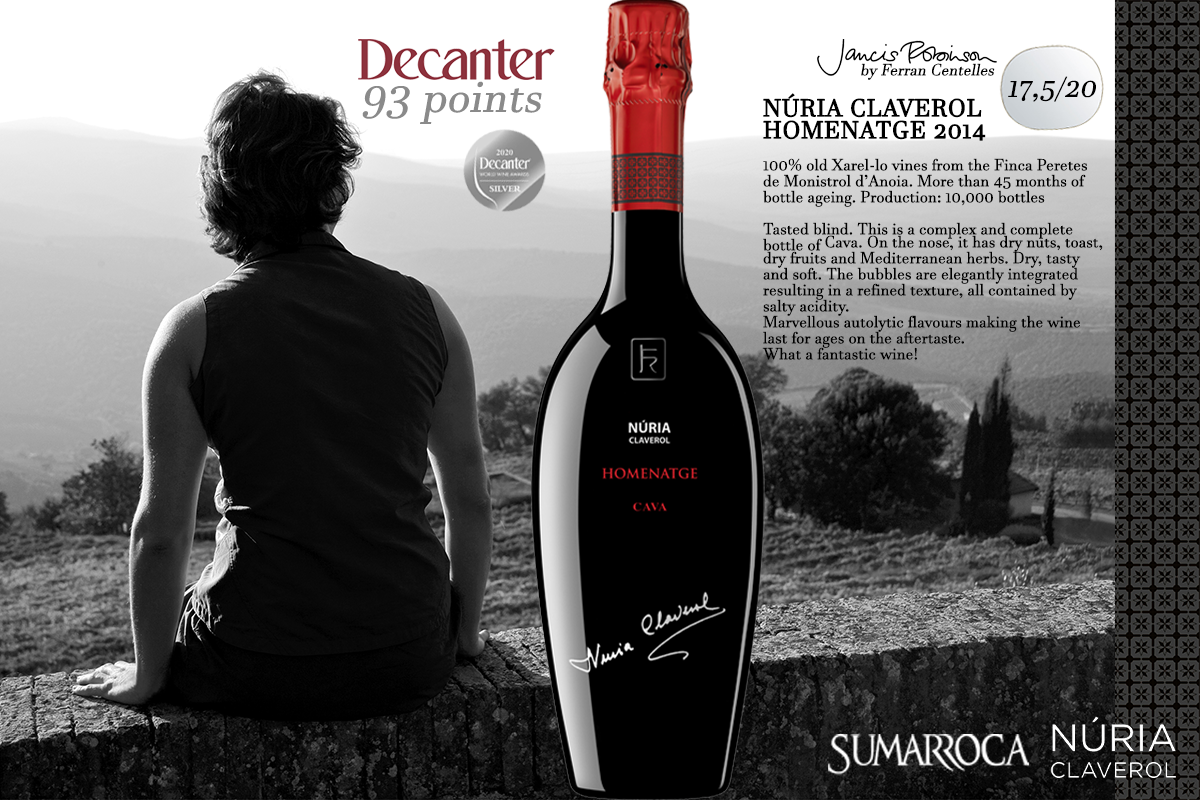 The Núria Claverol Homenatge 2014 gets 93 points in the PREMIUM CAVA tasting conducted by Decanter. The wines were selected and tasted by Pedro Ballesteros Torres MW.
This premium cava from Sumarroca with more than 45 months of aging, falls into the category of Highly Recommended.

This cava, signed by the three Sumarroca sons, which pays homage to his mother, Núria Claverol, has also achieved  17.5 out of 20 in the tasting of Ferran Centelles for Francis Robinson.

Without a doubt, good news for one of the most appreciated cavas in Sumarroca.

The philosophy and idea of ​​Núria Claverol was born in 2004. Sons of Núria and Carles Sumarroca decided to pay tribute to their mother. For this reason, they commissioned a unique and special design, inspired by ancient Greek amphorae. The winning design was obtained from the Sumarroca award in the 2004 ADI-FAD edition.
It sought to offer an elaborate, unique and genuine through an old vineyard of Xarel·lo.
Núria Claverol Homenatge is the only one of the four Núries that is signed by the three sons – Carles, Albert and Jordi – and expresses its gratitude to its mother by naming the highest-end cellars of Bodegues Sumarroca.

The Núria Claverol Homenatge is made in a place very influenced by the Bosc de l’Àliga and its ravine, which creates a stream of air refreshed by the forest. It is a vineyard facing east, which, along with the forest effect, causes the afternoon sun to go out earlier and not overheat the vineyard. The terrain is calcareous, with a high percentage of gravel and fossils in depth that give a great personality to the wines.

Intense and unique aroma, with mineral and toasty notes that give uniqueness to the whole. In the mouth it is extremely tasty, with a fine and perfectly integrated bubble that enriches the lively and fruity taste of the first notes, and the mineral, fresh taste of the latter.